One of the biggest contributors to the ever-growing problem of wealth inequality is that once you’re rich, it’s very easy to become even richer. In fact, you won’t even have to buy luxury goods anymore because people will simply give them to you. This lets you use the cash you would have otherwise spent to further pad your investments.

Money has a tendency to earn more money, and growth is always exponential. But have you considered that spending money also often results in free stuff? High net worth individuals pay lower bank and investment fees because they meet the minimum balance thresholds to have these charges waived. Additionally, the way shopping experiences and credit card rewards programs are structured, often the more money you spend, the more you free stuff you get.

In other words, the people who need it least get the most affordable banking and spending bonuses.

Amassing wealth is no easy task. Continuously increasing costs of living combined with stagnating wages mean few people can afford to set aside money for savings. Many North American families fund most of their lives with debt, and often its because they don’t have another choice.

Meanwhile, the rich are continuously getting richer. And the main reason for that is because having money easily earns you more money.

Money saved and invested will generate more money. Passive income is the term used to describe income earned without any additional work. Instead of you working for your money, your money works for you. Cash in a savings account will generate interest, increasing the amount of cash you have. Likewise, money invested in the stock market will generate dividends and earn capital gains, which you can then use to purchase more financial securities to do the same.

No fees for the wealthy

But it’s also worth considering that having money means paying fewer fees. It’s not uncommon for chequing accounts to charge $10 to $15 in monthly fees, but waive this expense if you maintain a balance of at least $5,000. Only a rich person can afford to leave $5,000 earning no interest in a chequing account for the sake of avoiding a $10 fee. A poor person will always have to pay the account fee because it’s unlikely they’ll ever have $5,000 to spare. That’s assuming they even have an account, as many as 25% of Americans are completely unbanked.

This extends to investment accounts. Even Wealthsimple gives you Wealthsimple Black which lowers your fee and tacks on the perks once you have six-figures invested. They up the ante again when you hit $500,000 with their Wealthsimple Generation service, which provides even more benefits to ultra-wealthy clientele.

The other thing worth noting is having financial assets also gives you access to affordable credit. It seems backward, but the less you need debt, the easier it will be for you to get it. A high income and high net worth with score you higher credit card limits and longer lines of credit, and at very competitive interest rates. Whereas a low income and low net worth will force you into the least affordable sources of credit, like credit cards or even payday loans. Ironically, the person who can afford it the least pays the most.

The rich pay the least for post-secondary education

Did you know the wealthy pay the least for their university educations? You might think everyone shells out the same amount for a post-secondary tuition bill, but it’s actually the students who can’t afford to attend school without student loans that pay a premium for their educations. Where a wealthy family will pay their child’s university costs at the time they’re due, a poor student will finance their degree and end up paying the cost of borrowing on top for tuition and books.

Even a low-interest rate of 5% means a borrower will pay as much as 30% of the principal borrowed over a 10-year loan term. A higher interest rate or a longer term will drive this cost even higher. It’s only the financially strapped that are forced to finance their degree in the first place that have to pay the premium. Rich parents might plunk down their black Amex to pay their child’s tuition bill, then go on their merry way. When was the last time you had the option to pay your student loan with your credit card? If you did, it probably wasn’t without penalty.

In other words, the ones who cannot afford to pay for post-secondary education outright AND also need it the most to better their financial situation, end up paying the most for it. The rich never pay student loan interest, though they might have to donate a building to the school if their child can’t get admitted on their own.

Spending money results in free stuff and even more money

If you’ve ever wanted to stop having to pay for something, the easiest way to do so is to have more money than you need to afford it in the first place. Whether its vacations or designer sunglasses, the secret to paying $0 for luxury items seems to be having more than enough money to buy them outright.

I always keep two credit cards: one is a cash-back credit card, another is a travel reward credit card. To state the obvious, the more I spend on these cards, the more rewards I accrue. Initially, it used to take me ages to earn enough travel points to even partially cover a domestic plane ticket. Now I can fully fund at least two roundtrips per year. Additional perks like free checked bags, seat upgrades, or meals on the plane also make the experience better than ever.

The other perk is my credit card gives me free access to airport lounges. I’ve started taking advantage of this because not only are they more comfortable to wait in, food, drinks, and coffee are free. Since I’m one of the people that perpetually arrive very early for flights, there are few things I love more than relaxing with a glass of wine and a latte while I wait for my plane to arrive.

It’s only when I could really afford to travel did travel become more affordable. I receive free flights only when I finally can afford to buy flights. And I still don’t travel often! I maybe step on a plane a half-dozen times per year. Imagine the perks of a wealthy businessman with international meetings and vacation homes for his family. If I only flew first-class, I imagine my experience would be even better.

The perk of free stuff with higher spending also seems to show up everywhere. At the grocery store when my bill tops $250, I often qualify for a special “gift” valued at $25 to $50. Over the past year, this has been everything from a gourmet chocolate basket to a set of barbeque tools. Some of the items I keep, reducing what I need to buy for myself, or others I re-gift as a housewarming gift which spares me having to pick something up from the store. I don’t know if there’s another tier of premium goodies for the ultra-wealthy, but at this point, it wouldn’t surprise me.

Home stores throw in a TV if you buy a bedroom set. Think about how many free TVs you can get if you’re redecorating your beach house.

This has been true at jewelry and department stores as well. Pandora throws in a free bracelet for big orders, The Bay gifts me an elaborate perfume set when I spend a certain amount. Trinkets that would cost me hundreds of dollars show up casually in my shopping bag. One of the bougiest experiences I previously tweeted about happened last year at a women-in-business luncheon. The floral centerpieces on the table included a pair of diamond earrings. One person at the table “won” the centerpiece. It wasn’t me, but I had ooh-ed and ahh-ed so much about the earrings, the winner gifted the centerpiece to me. I still can’t believe I attended an event where diamonds were freebies, but this is nothing compared to the $100,000 grab bags at the Oscars. Why do we give jewelry and vacation only to the people who can already afford to buy them?

Cash-back is the same. I still click through eBates to do most of my online shopping, which gives me anywhere from 0.5% to 8% cash-back on stores like Amazon to Sephora. Where initially my Big Fat Cheques used to come through as $20 here and there, I now solidly earn at least $100 per quarter. It’s an amount that could have bought groceries for weeks when I was a student, that now comes casually into my account as extra spending money.

I double dip and charge everything to my KOHO card, which gives me an additional 0.5% in cash-back. That cashback accumulates, and then I spend it, earning 0.5% cashback on that, effectively compounding the value of my shopping

Being able to afford to spend money has also led to bigger discounts on my shopping. Whether its getting free shipping for online orders over a certain amount, or getting a percentage off for hitting a certain threshold of spending at a store, the perks come easily and faster than ever. I understand these promotions, as well as cash-back or travel rewards on your credit card, aren’t free gifts. They’re incentives to try to get you to spend more money. But when you are already spending more because have more to spend, they do translate to free cash.

How can we stop this additional force driving up wealth inequality?

The short answer is we can’t. The wealthy receive perks and promotions because they are cornerstone customers for businesses. They bring the most dollars in, so keeping them happy is a way of keeping them coming back.

Simply being aware of how disproportionately money and stuff is distributed can help you feel better about your own situation. It seems like things are unfair because they are. All you can do is try to get ahead as best you can, and let someone else enjoy their Oscar treat bag. 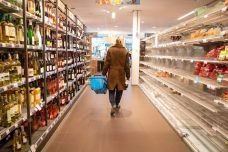